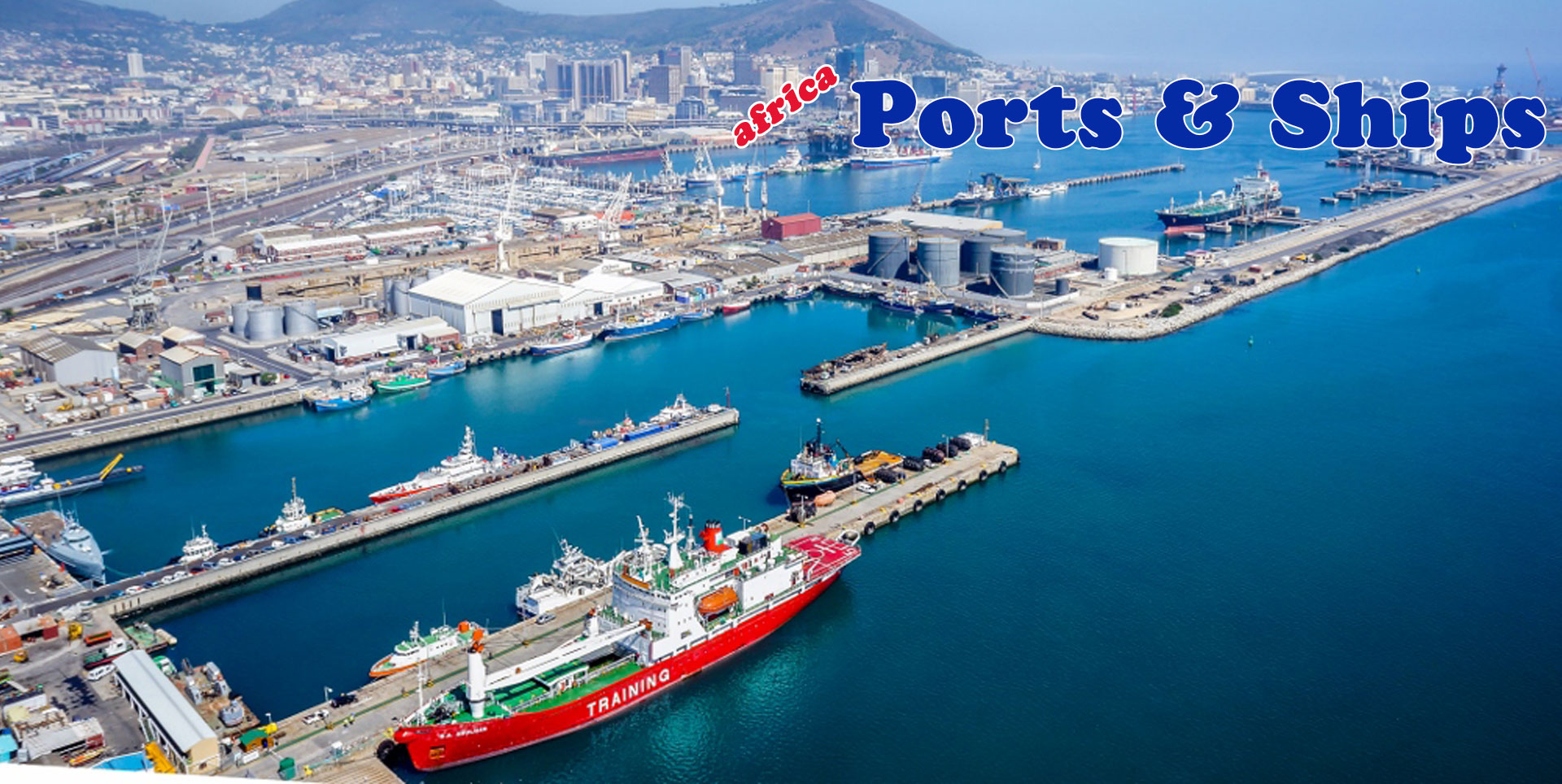 The Barbados-flagged, UK-owned and managed bulk carrier PILION (IMO 9425825) arrived in Durban earlier in April and is seen here making her approach into the entrance channel. The 58,800-dwt bulker was built in 2010 in the Philippines at the Tsuneishi Heavy Industries shipyard at Balamban. The ship is 189 metres in length and 32m wide. This picture is by Trevor Jones

A R360 million Admin Craft Basin (ACB) in the Port of Ngqura has been completed and will shortly be the new home for three harbour tugs and one pilot boat.

This follows the completion of the construction phase for this development and will lead to the freeing up of Berth C101 which was designed to handle revenue-generating vessels.

“Having had no facility to berth the tugs was always a limitation for the port in terms of revenue creation. This significant investment in infrastructure demonstrates TNPA’s confidence in the future capabilities of this expanding port,” said Zanele Ntantala, Senior Engineer who managed the project. “The long term future development of the port was taken into account during design. The position of the facility, located at the root of the Eastern Breakwater, allows unhindered developments in the long terms.”

As much as the structure is in the middle of an operational port, the construction was done in the dry. That took time, as the contractor had to build a temporary working platform and piles for the ACB finger pier. The pier is a suspended concrete deck on piles. The water was pumped out of the finger pier site area so that piling and other work could commence. It was pumped back in again after completion.

The facility is made up of a 300m long breakwater armoured with rock and a 120m long Finger Pier capable of handling six tugs or alternately four tugs, a pilot boat and other small craft as per the current medium term requirement. Provision has also been made for easy extension of the pier to accommodate two extra tugs should there be a need for more tugs in future. The design of the ACB provides ample opportunities for easy construction to berth additional small craft such as tugs, SANParks and SAPS vessels in future. The channel of the ACB as well as the basin is 8.3m deep.

There is one outstanding construction task to be completed before the tugs can move to their new home. This entails the final completion of dredging, which is anticipated to be completed by end April 2018. TNPA Lighthouses also has to install navigational equipment on site.

The contractor was Basil Read, with subcontractor Sub-Tech responsible for dredging. The role of TNPA’s Port Engineers department was mainly to ensure that the project was delivered within budget, according to specification and that it fulfills its purpose. The following people played a key role in ensuring its success – Gerrit du Plessis (Port Engineer), Zanele Ntantala (Senior Engineer), Thulani Dubeko (Harbour Master) and Tandi Lebakeng (Port Manager). Construction on the project started in February 2015. Angola says that it is essential that African nations develop complementary maritime strategies at the national, regional and continental levels for maritime space protection, risk prevention, threat identification, the definition of coordinated responses and legal accountability.

This was disclosed on Monday by the Angolan Foreign Minister Manuel Augusto at the official opening in Luanda of the 1st postgraduate course in Law of the Sea, designed to train Angolan cadres on issues related to the maritime domain in the…

The proposal of building a deepwater port at Techobanine in Mozambique, halfway between the KZN border and Maputo, just won’t disappear.

No less than Mozambique’s Minister of Foreign Affairs and Cooperation, José Pacheco, has made an announcement to the effect of moving ahead with the project at the end of the bilateral talks between the governments of Mozambique and Botswana.

This was on the occasion of the visit of the newly elected Botswana President Mokgweetsi Masisi when Pacheco said that the governments of Mozambique, Botswana and Zimbabwe were to meet soon to…

ANGOLA LOOKS TO THE UN TO ASSIST WITH PORT MANAGEMENT TRAINING

Angola has turned to the United Nations to provide aid in the training of management and maintenance personnel at the country’s ports as a mean of helping develop the sector.

This was revealed on Friday last week (13 April 2018) in Luanda by the UNCTAD secretary-general, Mukshisa Kituyi, who said UNCTAD would to pay closer attention to the Angolan transport sector and ensure that it can take full advantage…

Construction of Mauritania’s first deepwater port at Nouadhibou is due to commence this year.

According to an announcement made by Mohamed Ould Daf, president of the Nouadhibou Free Zone (ZFN), the development is in the face of an expected boom with the country’s economy set for rapid growth.

This follows the discovery and exploitation of…

There was potential in Egypt for coal from Mozambique to grow its share but it will have to be sold at a discount of US$2/mt to Richards Bay 6,000 kcal/kg NAR prices, the trader said.

The high ash and low moisture of the coal…

On 11 April 2018, Marine Nationale frigate La Fayette seized 413 kgs of heroin during a patrol in support of Combined Maritime Forces (CMF). La Fayette’s seizure is the third for the French Navy in support of Combined Task Force 150 (CTF 150). Together with Marine Nationale destroyer Jean de Vienne, the two French ships have confiscated over US$370 million of drugs over the last two months.

La Fayette’s Panther helicopter was conducting routine surveillance in the international waters of the Arabian Sea as part of a CMF patrol.

Detecting a dhow of interest, the Marine Nationale frigate closed in on the dhow to investigate further. Following a boarding to determine whether the vessel was without nationality, the vessel was confirmed as such and a non-destructive search consequently took place, locating 413 kgs of heroin, with a street value of over $96 million. On completion of the thorough search, the illegal drugs were catalogued and transferred to La Fayette to be destroyed safely at sea.

Acting Commander of CTF 150, Captain Christopher Ross, Royal Canadian Navy, said the continued success of CTF 150 is due to the cooperation between partner navies within CMF and stated “CMF is a multinational coalition committed to maintaining maritime security in this important region. We are privileged to have the opportunity to work with a professional force like the French Navy. Their continued success and significant contributions to the CMF mission are a testament to France’s commitment and the hard work of the men and women at sea. We look forward to achieving more together.”

Since December 2017, multinational assets in support of CTF 150 have seized over 28 tonnes of hashish and 2.5 tonnes of heroin, valued in excess of US$1.6 billion. CTF 150 is currently under Australian leadership, with a combined Australian and Canadian staff and supported by assets from the 32 partner nations of CMF.

LONDON, 17 April 2018 — The first Africa Blue Economy Forum (ABEF) (www.ABEF2018.com) is to be held in London on 7-8 June 2018, to coincide with World Oceans Day. More than 150 delegates and speakers are expected to attend, including government ministers, business leaders, ocean experts and environmental and maritime organisations, to discuss the economic contribution of the African oceans.

The blue economy is an integral part of the African Union’s Agenda 2063. The debut forum will address this agenda and enable businesses and policy makers to understand, explore and invest in Africa’s blue economy, to harness its potential and create a sustainable business model for the future.

Leila Ben Hassen, founder of ABEF 2018 and CEO of the event’s organiser, Blue Jay Communication, said: “At ABEF 2018, we will discuss crucial issues, such as how the blue economy can help create jobs and accelerate sustainable growth and development across the continent.

“We will also examine which economic policies will facilitate better ocean economy and open up opportunities for investors and entrepreneurs. In Africa, where 70% of the states are coastal, the ocean is not only a key driver for global trade but is also a major source of food and energy,” Ben Hassen added.

Paul Holthus, President and CEO of World Ocean Council, an official partner of ABEF 2018, remarked: “At the World Ocean Council, we address cross-cutting issues affecting ocean sustainable development, science and stewardship. We are committed to advancing the development and implementation of industry-driven solutions to ocean sustainability challenges. ABEF 2018 is a key gathering for raising awareness and developing the network around the African ocean economy and especially the sustainable development and related business opportunities that Africa has to offer.”

The blue economy covers aquatic and marine spaces, including oceans, seas, coasts, lakes, rivers and groundwater. It includes a wide range of productive sectors, such as fisheries, aquaculture, tourism, transport, commerce and trade, shipbuilding, energy, protection and restoration. The blue economy also encapsulates extractive industries, for example underwater mining and offshore oil and gas, provided they are undertaken in a manner that does not cause irreversible damage to the ecosystem.

Welcoming the initiative, Dr Carlos Lopes, former Executive Secretary of the UN Economic Commission for Africa (UNECA) said: “Several African countries already are formulating strategies to mainstream the blue economy into their national development plans. For instance, the Seychelles has established a ministry dedicated to promoting the blue economy.

“In South Africa, Operation Phakisa is expected to create one million new jobs by 2030 and add ZAR177 billion [GBP10.2 billion] to the country’s GDP. More countries must follow suit to reap from the available socio-economic opportunities,” Dr Lopes added.

For full details and to register attendance, visit the website: www.ABEF2018.com

PICS OF THE DAY : MAERSK LANCO Maersk Line’s 8,600-TEU capacity container ship MAERSK LANCO (IMO 9527049) arrives in Durban earlier this month to work her cargo of containers at the Durban Container Terminal. The ship, which is 300 metres in length and 45m wide, was built in 2012 at the Daewoo Shipbuilding & Marine Engineering Ltd in South Korea as hull number 4227. Maersk Lanco is owned and operated by Maersk. These pictures are by Keith Betts