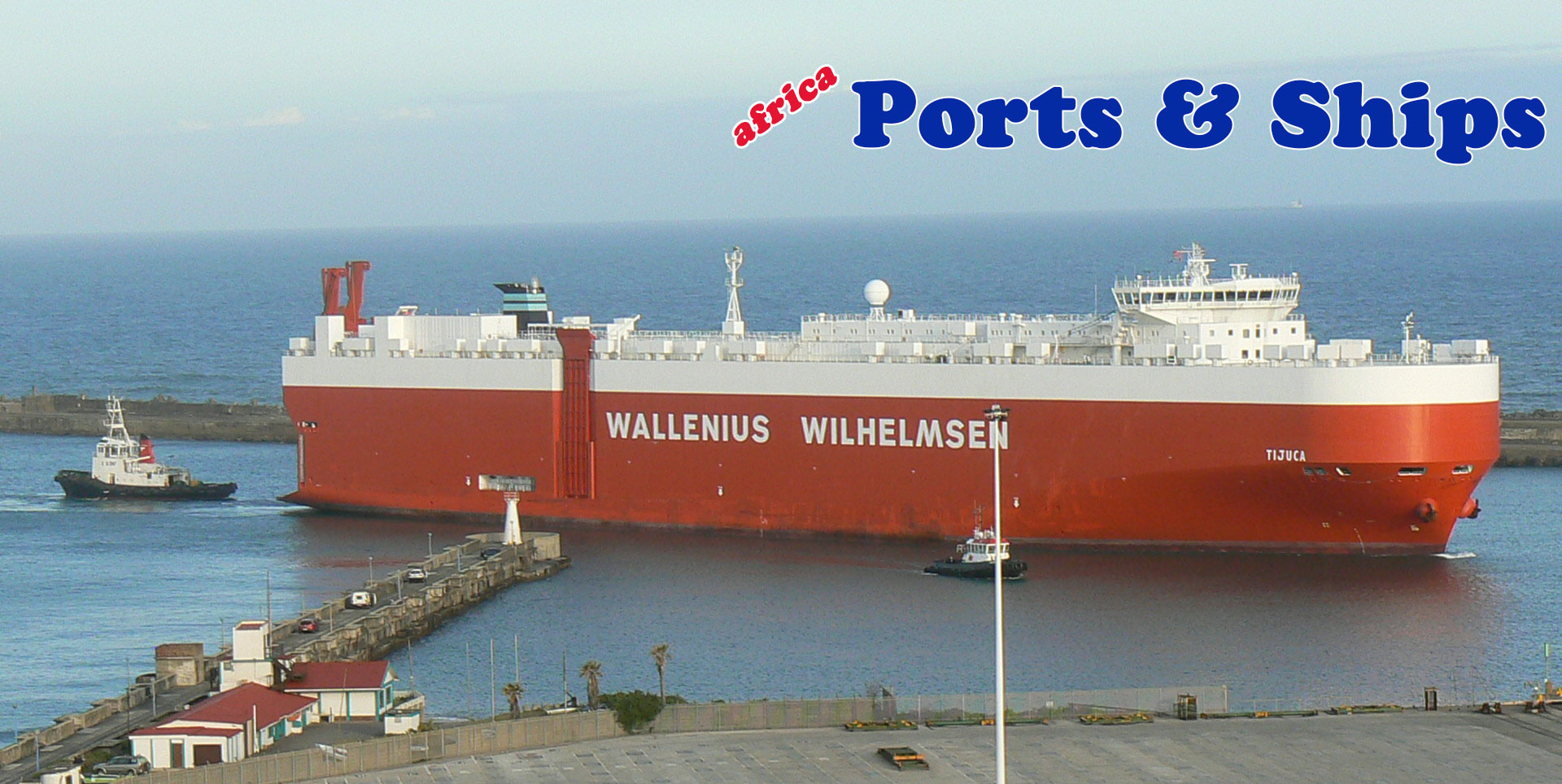 Ignazio Messina Line’s Ro-Ro container ship JOLLY DIAMANTE (IMO 9578957) at her usual position in the City Terminal (otherwise known as the Point) in Durban harbour, the southern terminus for the service operated by this and three other sister ships. The Messina ships operate a regular service calling at ports between Genoa in Italy and Durban in South Africa via the Red Sea and East Africa coast. Built in 2011 by the Daewoo Shipbuilding & Marine Engineering at Geoje in South Korea, the 46,635-dwt Italian-flagged ship is always an attractive sight whenever she is in port. At 240 metres long and 38m wide, with a draught of 10.5 metres she’s impressive in all respects. This picture of Jolly Diamante against her berth is by Ken Malcolm

Durban was also a runner up in the Best Quay Productivity and Best Transit and Supply Logistics Port categories.

TNPA took a total of four out of seven awards as well as several runner-up positions in a hotly contested competition featuring ports from countries such as Mauritius, Kenya, Seychelles and Djibouti.

Other wins for TNPA were Best Quay Productivity: Port of Saldanha, with Port of Durban the first runner-up, followed by Port Elizabeth as second runner-up.

“Our operating strategy is geared towards reducing ship turnaround time, vessel waiting time and cargo dwell times, and to optimise our use of port assets in an effort to reduce costs for our customers,” he said.

While TNPA has been positioning the Port of Ngqura as a regional transshipment hub in sub-Saharan Africa, Durban still maintains the lion’s share of the country’s transshipments, as its busiest container port.

Meanwhile, there were also accolades for the Port of Mombasa in Kenya, which was declared the best Transit and Supply Logistics Port in Eastern and Southern Africa.

The Port of Mombasa, which is managed by the Kenya Ports Authority (KPA), also emerged as second runner-up in the category of Best Container Terminal Productivity after South Africa’s Port of Durban and Port of Ngqura respectively.

The award comes soon after the Port of Mombasa was recently named, for the third year in a row, as the best cruise Port in Africa by the World Travel Awards.

The Port of Victoria of Seychelles managed by Seychelles Ports Authority emerged number one under the best performing/progression for traffic growth 2015-2016 and was followed by Port Louis (Mauritius) and Port of East London (South Africa) second and third place while Namibia’s Port of Walvis Bay under the Namibian Port Authority was named the best port policy for capacity building. Source: TNPA, PMAESA, Citizen News

Vale Moçambique, a subsidiary of Brazilian mining group Vale, is to stop using the Sena Railroad and the port of Beira for its coal exports, and will instead focus all exports on the Nacala Logistics Corridor (CLN) and the Nacala deep-water port.

Chairman of Vale Moçambique, Márcio Godoy said in an interview with the daily newspaper Noticias on the sidelines of the ceremony to sign contracts for financing the CLN (see yesterday’s Africa PORTS & SHIPS), that Vale intends…

In an attempt at making it more difficult to smuggle arms into the country using shipping containers, the Federal Government has issued a directive enforcing the palletisation of all cargoes loaded into the containers.

The move follows a number of interceptions made at the country’s ports, notably Tin Can Island, where ammunition and weapons were discovered hidden inside several containers that had been imported. There was a concern at the time that the arms and ammunition might be for the militant Boko Haram insurgents that are active in the West African country, although the nature of the weapons suggests otherwise. The training vessel sailed from its base in Cape Town on 24 November, en route to the Antarctic but first to Mauritius to take on board a group of between 40 and 47 Indian scientists from the Indian Nation Centre for Antarctic and Ocean Research. The scientists will be visiting Antarctic bases to undertake studies and tests…

On 27 November RFA Tidespring was welcomed to the Fleet when a Service of Dedication was held at HM Naval Base Portsmouth in the presence of guest of honour and Honorary Commodore-in-Chief of the RFA, HRH Prince Edward, Earl of Wessex.

The new 37,000 tonne ship, one of the four biggest tankers to be purpose-built for the RFA, recently arrived at Portsmouth in preparation for her official acceptance into operational service. Once in service with the RFA, she will…

Total and CMA CGM have signed an agreement covering the supply of around 300,000 tons of liquefied natural gas (LNG) a year for 10 years starting in 2020.

This unprecedented volume in the history of LNG bunkers will fuel CMA CGM’s nine newbuild container ships, scheduled for delivery from the beginning of 2020 onwards.

In February 2017, CMA CGM and Total had already signed…

Miniatur Wunderland – Largest Model Railway video [4:54] (in case you are concerned, there is a ship included…..)

In 2018, the SMB-Winning consortium will launch feasibility studies for the construction of an alumina refinery and a railway line to be built by 2022

CONAKRY, Guinea: The SMB-Winning consortium, a major player in the bauxite sector, presented to His Excellency Alpha Condé, President of the Republic of Guinea, a project to build an alumina refinery in Guinea as well as a railway to open up the Boffa corridor and to carry bauxite to the refinery and the Dapilon river port. The total investment planned for the whole project is estimated at US$ 3 billion.

The feasibility and social and environmental impact studies will be carried out as soon as early 2018 for a start of works planned in 2019. The construction phase will create 10,000 jobs and mobilise local companies, among which are experts in civil engineering, extraction, construction and services. The refinery will be located in Dapilon, in the Boké Special Economic Zone.

“This investment illustrates our ambitions for the Boké region and our contribution to Guinea’s economic and social development. The mining sector, together with agriculture, is the lung of the country’s development and, in our approach as a mining operator, must also focus on facilitating a local redistribution of the benefits, especially in favour of the communities, education, jobs, and priority sectors such as the agro-industry,” said Frédéric Bouzigues, Managing Director of Société Minière de Boké (SMB).

“The local processing of raw materials is one of the biggest challenges for a more inclusive growth in Africa because it creates more value locally while leading to economic diversification. This commitment to Guinea also demonstrates our confidence in the continued improvement of both its business environment and macroeconomic stability. This project also demonstrates the technical and financial complementarity of our Franco-Sino-Singaporean consortium to carry out this type of ambitious projects,” said Fadi Wazni, Chairman of SMB.

Founded in 2014, the SMB-Winning consortium brings together three partners in the fields of bauxite mining, production and transportation: Singaporean shipping company Winning Shipping Ltd, UMS, a French owned transport and logistics company that has been present in Guinea for over 20 years, and Shandong Weiqiao, a leading Chinese company in aluminium production.

The consortium has planned to export 30 million tons of bauxite in 2017, making Guinea the world’s largest exporter of bauxite and the consortium one of the major contributors to the country’s gross domestic product.

PIC OF THE DAY : BOSPHORUS PRINCE The bulk carrier BOSPHORUS PRINCE (IMO 9198381) seen when on arrival in the port of Durban earlier in November, assisted by two of the older harbour tugs, UMSUNDUZI (at left) and INYALAZI. The 45,572-dwt, 186 metre long by 30.4m wide bulker has a draught of 10.9m and was built in 2000. Owned and managed by Turkish interests operating out of Istanbul, and flying the Panamanian flag, Bosphorus Prince has since sailed and is heading for Aqaba. These pictures are by Keith Betts

“Just as there is no loss of basic energy in the universe, so no thought or action is without its effects, present or ultimate, seen or unseen, felt or unfelt.”
– Norman Cousins