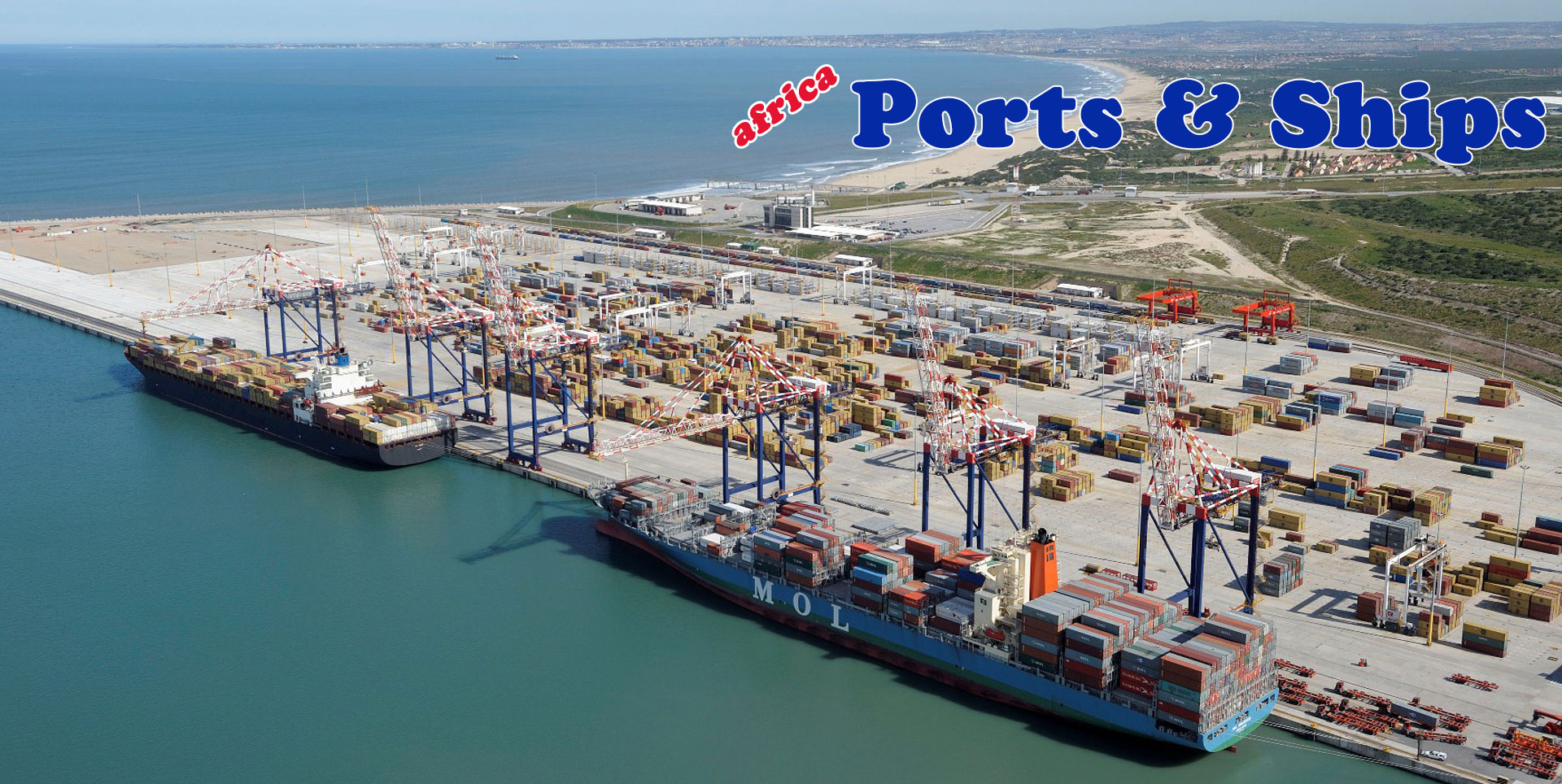 The Greek owned tanker AXIOS (46,792-dwt) is seen arriving at Lyttelton, New Zealand on a sunny spring afternoon during September. The oil and chemical products tanker was arriving from Daesan with jet fuel for the port that services the Christchurch region. Axios was built in 2006 at the STX Shipbuilding Busan shipyard in Pusan, South Korea and is owned and managed by Sun Enterprise of Athens, Greece. The vessel’s homeport is at Chios in Greece. The lower photograph shows the ship’s funnel markings, an area that no longer appears to attract as much interest from photographers these days. Fortunately that is not the case with our man in New Zealand, Alan Calvert.

TALKING ABOUT THE MARITIME ECONOMY IS OVER.  WORK ON IT, SAYS MINISTER

The development of South Africa’s maritime sector is now formally in full swing under the banner of the Operation Phakisa (Oceans Economy) initiative, with billions of rand of State funds currently being invested in particularly ports and related infrastructure.

However, it is now absolutely crucial to ensure that all South Africans are on board and involved, and central to the strategy is a need to both broaden and entrench fully education and skills development of especially the young, South Africa’s Minister of Transport, Mr Joe Maswanganyi told hundreds of people – among them 400 high school children – attending this year’s World Maritime Day celebrations held in Port St Johns, Eastern Cape.

Port St Johns, a little town settled in a picturesque area of South Africa’s Wild Coast along the Indian Ocean, midway between East London and Durban, was chosen by the Department of Transport for this year’s observation of the International Maritime Organisation (IMO)-driven World Maritime Day held on 28 September.

This was for a number of reasons. Among these is that the town symbolizes one of the most under-developed areas of South Africa settled along the country’s 3,200 km long coastline. It used to fall under the jurisdiction of the former Transkei homeland or Bantustan whose development was simply ignored by the previous government.

The town is now among coastal areas of the country earmarked earlier this year as part of a coastal and marine tourism initiative for a rapid development plan over five years, beginning in 2017.

Port St Johns also falls under the OR Tambo District Municipality which is home to former African National Congress president, Mr Oliver Reginald Tambo whose contribution to the country’s liberation struggle is being celebrated in 2017.

The World Maritime Day event held in the town on 28 September was the second of its kind with an international maritime theme to be held in the region, the first having been the international Seafarers’ Day held in Mbizana in June.

Minister Maswanganyi said these maritime sector related initiatives were a clear indication of Government’s expressed commitment to driving new investment into areas that are both underdeveloped and with great potential to contribute to the country’s economy through business investment and job creation.

According to Maswanganyi, there is no longer a reason why people living in the country’s coastal provinces (Northern Cape, Western Cape, Eastern Cape and KwaZulu-Natal) should not be in the lead in the development of the country’s maritime economic sector.

Infrastructure development, education and skills development would be the key drivers for investment, he said. “Government has identified the maritime sector as an important sector of the country’s economy.

“Various ports across the country are receiving billions of rand in investment to enhance their capacity – facts of which will be fully revealed when President Jacob Zuma reports to the nation about the progress of Operation Phakisa (Oceans Economy) in Durban next month.

“We are not going to leave behind Port St Johns. Among highlights of projects in the area is the expansion of the N2 which will formally link the town of Port St Johns to increased road traffic between the major cities of East London and Durban. As much as R8-billion is being invested in the Wild Coast road construction project.

“This welcome development indicates that as a country, we cannot remain consumers of maritime services of other countries while we have such coastal heritage.

“Through the maritime transport and manufacturing projects we will create between 40,000-56,000 job opportunities, whereby our people will be involved in maritime construction, telecommunication technologies and equipment manufacturing. These will contribute between R21-25-billion to the economy of South Africa. In order achieve these goals within the set timeframes, it cannot be business as usual,” he said.   source and pictures: SAMSA

Watch a 23 minute YouTube video of the minister’s speech:

Transnet says that it has noted Business Leadership South Africa’s (BLSA)’s statement claiming that it had suspended Transnet’s membership, which it says is inaccurate and misleading.

“BLSA approached Transnet early this year, requesting it to consider renewing its membership for 2017. Transnet elected not to renew the membership due to cost-cutting measures. This was…

Namport has announced that the Chinese container line COSCO has commenced calls at the Port of Walvis Bay for the first time.

On Saturday (30 September) the COSCO KAWASAKI (50,713-dwt) heralded the new service when she arrived in the port in mid-morning.

The French Navy patrol frigate FS FLOREAL is due to arrive in Durban on 7 October to refuel and for a few days of R&R.

The naval ship, which is based at Reunion and conducts patrols of the French islands of the Western and Southern Indian Ocean, will be departing again on 11 October 2017. The 30,277-ton Adonia will be renamed AZAMARA PURSUIT.

Adonia will undergo a major refurbishment to ring the ship in line with upgrades that were completed earlier this year on Azamara’s other two ships, AZAMARA JOURNEY and AZAMARA QUEST, which each accommodate just 694 passengers.

In confirming the sale of Adonia, P&O Cruises said…

COEGA SEZ FORGES AHEAD TO BE NEW AUTOMOTIVE HUB

The Coega Special Economic Zone (SEZ) is forging ahead to become the new automotive hub on the African continent.

The SEZ, which is located in the Eastern Cape, is continuing with construction in Zone 1 of the Coega SEZ BAIC site.

CALLS FOR MISCELLANEOUS & DEMURRAGE CHARGES TO BE DROPPED AT TEMA

Following the introduction of the paperless transactions at the Port of Tema in Ghana, there are increasing calls for doing away with miscellaneous or service charges on import and export transactions.

Stakeholders say that at present importers have to pay miscellaneous charges because clearing agents say these monies are to cover service charges involving things like photocopies and transportation. With the paperless system these should…

PIC OF THE DAY : CANOPUS LEADER NYK Line’s Ro-Ro car carrier CANOPUS LEADER (51,917-gt) sails from Durban harbour on Friday last week, 29 September. Owned and managed by United Ocean Shipmanagement of Singapore, the Ro-Ro was built in 2009 at the Tsuneishi Shipbuilding shipyard in Fukuyama, Japan. The 180-metre long, 32m wide ship has a maximum capacity of 5,100 motor cars. These pictures are by Keith Betts

“If we can acquire an attitude of self-belief, then we will surely determine our future actions and our future life opportunities.”
― Stephen Richards